Will visitors please note that all new items are now loaded onto the Blog of the White Voice Association - whitevoice14.blogspot.com
This Blog will remain live bnecause there are a lot of article son it but will not be updated.
Posted by Eddy Morrison at 12:32 No comments:

This kicked off yetserday, I didnt get to hear about it until today. I would have gone down for a fuller report. Nazi Salute! That should keep the Left away from the Yellow Vest Movement

Posted by Eddy Morrison at 07:40 No comments:

The Transgendered versus The Preacher

Tense & Nasty: The Transgendered versus The Preacher Before the B.C Human Rights Tribunal
Free speech and the rights to express one's religious beliefs were very much on trial during a five day hearing (December 11-17) before the British Columbia Human Rights Tribunal.  Ronan Oger, a transgendered advocate and activist and a vice-president of the provincial New Democratic Party, had laid a complaint against Bill Whatcott for distribution of 1,500 copies of a leaflet during the May, 2017 provincial election. Mr. Whatcott's leaflet called into question Oger's fitness for public office, on the basis of his sexual confusion. Relying on the Bible's account that God created two sexes, Mr. Whatcott argued that if Oger couldn't get his sexuality right, should be really be entrusted with making decisions on such matters as the provincial budget.

The original one-person tribunal, just before the proceedings opened expanded to three, consisted of Devyn Cousineau, an outspoken social justice warrior and donor to LGBT causes. The defence tried unsuccessfully to have her recuse herself for a "reasonable apprehension of bias." In preliminary proceedings, the Tribunal rejected all the defence character and expert witnesses. The final defence witness-to-be was Dr. Willi Gutowski, a medical doctor and psychiatrist with over 30 years of clinical experience treating patients in Chilliwack and the U.S. He had frequently been called as an expert witness before U.S. courts. He had treated transgendered people in the past. He said, during testimony seeking to qualify him, that he "has a particular interest in dissociative disorders." No one can make you hate, he said: You will yourself to have the thoughts that lead to the emotions of love or hate. "Love and hate are both a choice of the will." His expertise would have been crucial as Oger's lesbian lawyer had contended that Mr. Whatcott's pamphlet was likely to expose the transgendered candidate to hatred or contempt. The panel decided to reject Dr. Gutowski concluding: "The burden has not been met as to his qualification on this topic." Thus, the defence had but one witness -- Bill Whatcott.
The defence was not allowed to challenge the nature of transgenderism. Is it mistaken and immoral, as Bill Whatcott argues on biblical grounds? Is it a state of delusion -- in short, mental illness -- as many psychiatrists and scientists contend? Humans are born with one of two and only two chromosomal combinations: two "X Chromosomes" -- female; and X and a Y Chromosome -- male. Apparently, if you're born a man but identify as a woman, or vice versa, then you are whatever you feel you are or want to be. Thus, a hulking, hairy man with a penis who identifies as a woman should be able to prance into the girls' washroom and ogle 13-year old girls. 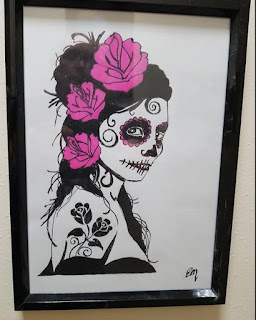 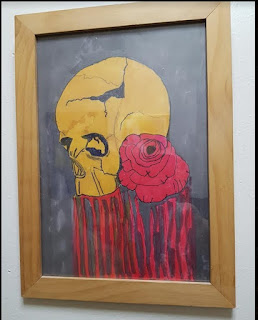 Posted by Eddy Morrison at 07:37 No comments:

The latest issue can be read HERE
Posted by Eddy Morrison at 01:08 No comments:

Latest Issue of White Voice No.44

Latest issue of White Voice No.43

Click here
Posted by Eddy Morrison at 16:08 No comments:

Britain: May is a TRAITOR! Time for the British to don Yellow Jackets!

Posted by Eddy Morrison at 05:45 No comments:

The Call Of The Old God's - Yuletide 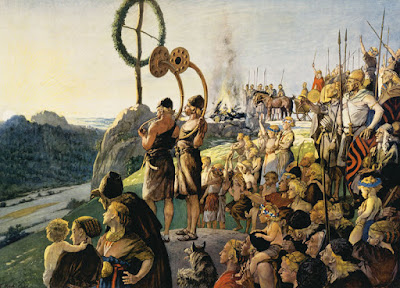 The Call Of The Old Gods
Whilst most readers of this Blog will be again celebrating Christmas once again, my guess is that a small minority will be like me and be celebrating the Feast of Yule.
As a non-Christian (albeit an Atheist), I do feel that the celebration of Yule is a far more fitting festival for our folk than the imported religion of the Middle East which has usurped Yule (and Easter) and turned them into Christian festivals.
What was, or rather is the Feast of Yule?
Well firstly it is not celebrated on the 25th December but on the 21st December, the Winter Solciste (Samhain), when it marks the shortest day. The Sun is at its lowest ebb but is to be reborn and rekindled as from the 22nd December the days start to lengthen again.

Yule or Yuletide ("Yule time") was and is a festival observed by the historical Germanic peoples. Scholars have connected the celebration to the Wild Hunt, the god Odin, and the pagan Anglo-Saxon Mōdraniht.
For todays Heathens and Pagans, Yule along with Midsummer in the 21st of June is one of the two great festivals celebrated by our Ancestors before the coming of the invading Middle Eastern religion of Christianity.
Across the whole of Scandinavia and down to the the Rus Folk of what is now Byelirussia; and across to Iceland, Greenland and for a brief period, Vinland in North America, our Ancestors paid homage to the Old Gods and the rebirth of the Life Force of 'Sol Invictus ' - the unconcquered Sun.
Yule is the modern English representation of the Old English words ġéol or ġéohol and ġéola or ġéoli, with the former indicating the 12-day festival of "Yule" (later: "Christmastide") and the latter indicating the month of "Yule", whereby ǽrra ġéola referred to the period before the Yule festival (December) and æftera ġéola referred to the period after Yule (January). Both words are thought to be derived from Common Germanic

In the book  "The Pagan Family" by Ceisiwr Serith the author, a practising Pagan has this to say:
"At Samhain we honour, celebrate and welcome the descent into, and return of, the dark - the beginning of the New Year, acknowledging that all beginnings emerge from darkness.At the Winter Solstice we reach the depth of that darkness with the longest night of the year. Darkness has reached its peak.
"Now we start to wonder: will this continue? Will the Earth grow darker and colder as the Sun disappears into the south until only darkness is left? But at Yule a wonderful thing happens. The Sun stops its decline and for a few days it rises in about the same place. This is the crucial time, the cusp between events. The Sun stands still, and everyone waits for the turning.
In our heads we know the light will return. But in the darkness of Winter, can we be sure? do our hearts believe what our heads tell us? Will the light keep its promises? We all have moments of darkness, when we don't know how much deeper we will go before the light starts to return (or even if it will). The world has moments too; it understands us, and lives as we do.
The Sun does start north again and the light comes back. In the world, in our lives, the light comes back. This is indeed something worth celebrating, and it has been celebrated throughout the Northern Hemisphere in remarkably similar ways."
Samhain was the Celtic name for Yule and in most respects apart from the names of the Old Gods was essentially the same festival.

Paganism/Heathenism is on the rise against across our Western lands - our Ancestral Lands.
Sadly, the New Age lefties have split the Pagan Faith Movement into two very distinctive camps.
As one would expect, the New Agers let anyone of any background or Race into their ranks and claim it is a religion for all, which it is clearly not.
A central division within the Heathen movement concerns the issue of race. Some groups adopt a "universalist" perspective which holds that the religion is open to all, irrespective of ethnic or racial identity. Conversely, others adopt a racialist attitude—often termed "folkish" within the community—by viewing Heathenry as an ethnic or racial religion with inherent links to a Germanic racethat should hence be reserved explicitly for people of Northern European descent, or "White people" in general. Some folkish Heathens further combine the religion with explicitly racial, White Nationalist  perspectives. . Although the term Heathenry is used widely to describe the religion as a whole, many groups prefer different forms of designation, influenced by their regional focus and their ideological preferences. Heathens focusing on Scandinavian sources sometimes use Ásatrú, Vanatrú, or Forn Sed; practitioners focusing on Anglo-Saxon traditions use Fyrnsidu or Theodism; those emphasising German traditions use Irminism; and those Heathens who espouse folkish and White Nationalist  perspectives tend to favor the terms Odinism, Wotanism, Wodenism, or Odalism

The worst excesses of the deluded Heathens - we'll go along with the term 'Universalist will be exhibiting themselves at Stonehenge once again this Solstice and making a mockery of what is without any shade of doubt an integral part of the Faith of Our Forefathers.
Only the Folkish form of Paganism truly understands that it is a belief in The Blood, and that Blood is of our Ancestors be they Norse, Rus, Anglo-Saxon or Germanic.

An essential book produced by the Woden's Folk Kindred is 'The Heathen Way' available from either Amazon or direct from the Woden's Folk website at £12.50
It is full of the lore of our Folk of the past and of we their Children.
You will find lots more books if you do some digging and there is also a substantial library of Folkish Pagan literature too, in the best tradions of Beowulf.

I'll end this with a short (ish) poem by Susan Cooper encapsulating the whole feeling of Yuletide: -

Welcome Yule...
“So the shortest day came, and the year died,
And everywhere down the centuries of the snow-white world
Came people singing, dancing,
To drive the dark away.
They lighted candles in the winter trees;
…They hung their homes with evergreen;
They burned beseeching fires all night long
To keep the year alive,
And when the new year’s sunshine blazed awake
They shouted, reveling.
Through all the frosty ages you can hear them
Echoing behind us – Listen!!
All the long echoes sing the same delight,
This shortest day,
As promise wakens in the sleeping land:
They carol, fest, give thanks,
And dearly love their friends,
And hope for peace.
And so do we, here, now,
This year and every year.
Welcome Yule!!”
– Susan Cooper,

Happy and Festive Yule!
Eddy Morrison
(This article is scheduled to appear in the next issue of White Voive No,22 - out 1st Deve,ber 2018)
Posted by Eddy Morrison at 14:19 No comments: